Mercedes Benz in the movies

Over the years, Mercedes-Benz has been synonymous with luxury, style, performance, safety and technical innovation. That is the reason why it is often used in movies to portray a character who is wealthy, successful, suave, or has a good taste in cars. Often, the cars are so much a part of the film that the movie wouldn't be what they are without their Mercedes Benz.

In the much awaited and recently released Justice League a pair of stunning Mercedes models graced the silver screen as Batman and Wonder Woman's wheels. The AMG Vision Gran Turismo is the "civilian Batmobile", driven by Bruce Wayne (Ben Affleck) on his job to recruit The Flash. And Wonder Woman (Gal Gadot) goes topless in the new movie with her choice of a car – a Mercedes E-Class Cabriolet.

Dr Jens Thiemer, vice president of marketing for Mercedes, said: "With Justice League, we found the perfect partner to highlight our current vehicles as well as communicate the fascination of our brand.

The one in Justice League was built specially for the superhero blockbuster. Now Bruce Wayne, a.ka. Batman in particular, is not only one of the richest fictional characters but he also has a penchant for driving some of the best, swankiest cars on the planet.

Mercedes-Benz teams worked closely with the cast and crew of the DCEU flick to ensure that the finished movie car met all the film production requirements. A detailed interior was developed with with illuminated elements, racing seats and a virtual dashboard. They even took the pain to modify the car's design to accommodate Ben Affleck's large frame, as the original dimensions proved to be quite cramped for the big built Ben to fit into. The car was scaled up to 110% of its real size so that the tall and bulked-up Affleck could sit comfortably and convince Barry Allen to join the Justice League.

Let's look back at some other memorable moments of Mercedes-Benz in movies lately. The list below features blockbuster films where the iconic three-pointed star brand either had a major role to play in the plot or it merely made a special cameo.

Transformers - Dark of the Moon 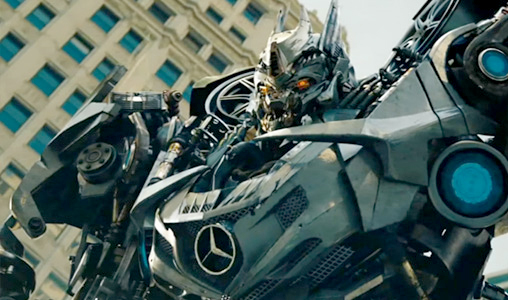 Perhaps the most expensive Mercedes-Benz car to grace the big screen was the SLS AMG in Transformers Dark of the Moon. Mercedes has built a lot of cars that have been in movies, but none of them have come close to being as cool as this SLS AMG. It was driven by supermodel Driven by supermodel Rosie Huntington-Whitely in the movie "Transformers: Dark of the Moon," and managed to stay hidden for a significant part of the movie. However, the climax of the movie revealed that this SLS AMG was secretly the Decepticon Soundwave, which is one of the most notable characters from the Transformers series. Mercedes is so well known and loved that a Transformer from another galaxy saw it and decided that the SLS AMG is exactly what it wanted to look like.

The biggest summer flick of 2015, Jurassic World debuted the new Mercedes-Benz GLE 450 AMG Coupe, which had remained a heavily guarded secret until the film crew called "action!" Jurassic World is the most successful movie in its opening week to date. If there is one film franchise that heavily made use of Mercedes-Benz vehicles, this is it. From its first movie Jurassic Park up to the latest in the franchise, it had the three-pointed star brand written all over it. But the GLE Coupe wasn't the only Mercedes to enjoy the Jurassic World spotlight. The G-Class, G63, AMG 6×6, Sprinter, and Unimog all got some screen time – because in a setting like Jurassic World, you spare no expense.

A slightly modified version of the first Mercedes-Benz M-Class was attacked by two of Jurassic Park's T-Rex dinosaurs. Notably, the cars did manage to survive the brutal attack. 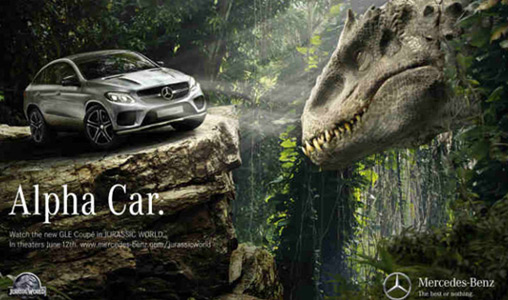 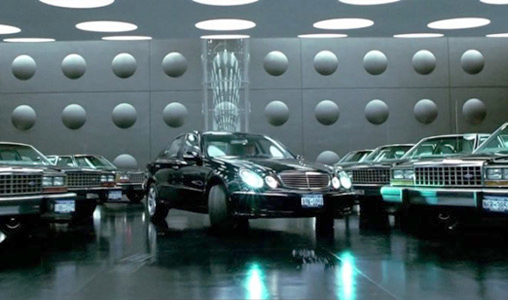 "Men in Black II," had several different luxury cars in the movie. The one that sticks out the most and gets the most prominent role is the Mercedes E500. Dubbed the "new hotness" by Will Smith when he went off-script, the E500 replaces their old vehicle used in the first movie. While it is not possible to get one with the same alien-inspired technology features as the one from the movie, it is possible to get an E500 with a wide range of real-world features that will get you just as much attention.

A Good Day to Die Hard

The final instalment so far in the Die Hard film also showcased a lot of Mercedes cars and trucks littering the streets of Moscow. Overall, there were 70 units from the brand that appeared here, which include the latest models in its core series. Although the movie failed to please a lot of movie critics, it had one of the most unforgettable vehicle chase scenes. The early moments of the film showed Willis's character giving a chase to a massive US Cougar Mine-Resistant Ambush (MRAP) vehicle using a Unimog and later a G-Class. Jai Courtney was a part of the scene too driving a modest Sprinter van.

Few luxury vehicles can claim such an impressive list of film features, but then again, Mercedes is like no other. 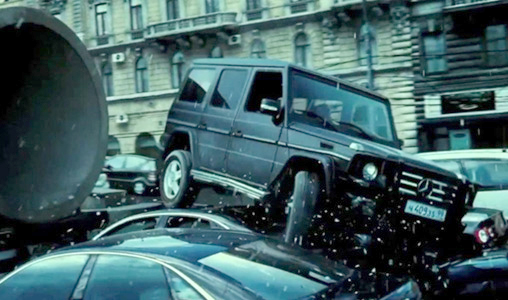 Clint Eastwood's 1990 film The Rookie is a modern classic action adventure. Mercedes gets an exciting cameo with Eastwood behind the wheel, driving the car out of a building's window and crashing it through a warehouse skylight. This scene was so iconic that it inspired Mercedes' campaign slogan, "engineered like no other car."

Coming down to Mumbai, the financial capital of India, the Mercedes Benz is a head turner and a much sought after car. It is the car that spells luxury, style, performance, and class. As with the rest of the world, it's a car where the wealthy, successful and people with impeccable taste are seen in.

Mercedes Benz is a car that inspires and aspires. And, Autohangar Advantage, the certified used Mercedes dealership is committed to help their customers fulfil their dreams of owning a luxury car.

Like every celebrity that believes in a Mercedes Benz, Autohangar Advantage offers you the opportunity to ride the wave of confidence and success by owning the best certified used Mercedes Benz. Because they understand you don't always have to pay through your nose to own a set of luxury wheels.